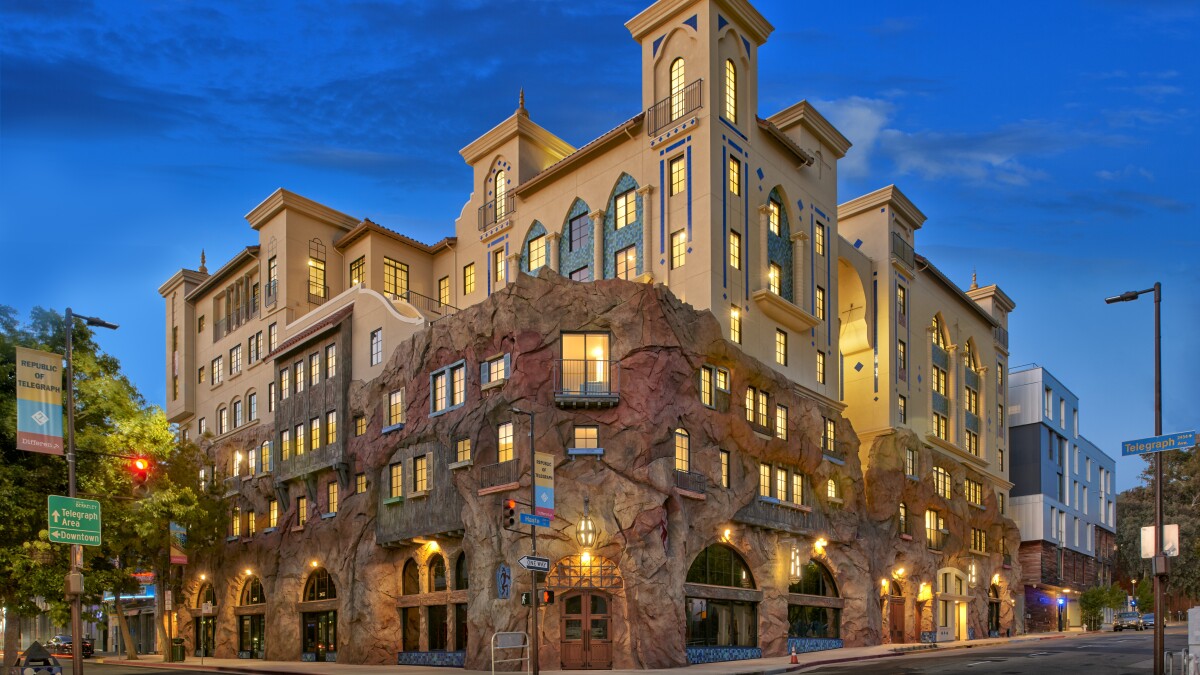 A student housing apartment complex in Berkeley known for its unusual, castle-like design has sold for more than $100 million to a group led by Goldman Sachs.

The Enclave Apartments building on Telegraph Avenue, a few blocks from the UC Berkeley campus, was purchased last week by an affiliate group headed by the Wall Street firm in an all-cash deal for $112.9 million, according to public records, which were first reported by the Mercury News and confirmed by The Times.

The mixed-use seven-story building, with a facade evoking craggy cliffsides, can house 252 students in dormitory-style units. It includes commercial retail space on the first floor, which sits mostly vacant with the exception of a sandwich shop.

Since it opened in the fall of 2020, the structure’s design, described by its architects as a “Moorish palace,” has drawn the intrigued gaze of critics, tourists, students and business owners alike.

“It’s as if Harry Potter and Fred Flintstone decided to build a McMansion. On acid,” remarked a critic with the San Francisco Chronicle, who also described the complex as a “Moorish-Tudor fever dream.”

The building’s original architect, Kirk Peterson, told Berkeleyside after its completion in 2020: “I wanted to make art. I wanted to do a correct, authentic, historicist building. Now it looks like crap. It looks god-awful.”

Because of city permitting issues, the development changed hands multiple times and Peterson was replaced by a succession of two architectural firms.

Peterson and the property’s original owner dreamed up the design by drawing from a mashup of influences across several continents: cave dwellings in the south of France, Yemeni architecture, Baroque churches, hill towns of Italy and the Spanish Colonial Revival style.

“I like it,” said Al Geyer, founder and owner of Annapurna, a longtime smoke shop across Telegraph from the apartment complex. “From the very beginning, when I saw a sketch, I thought it was definitely a place maker, so to speak, that would be there for a century.”

Geyer, whose shop was a hotspot of the Bay Area’s counterculture scene in the 1960s and ’70s, said the Enclave’s playfulness fits right in with the historically whimsical and irreverent nature of Telegraph Avenue.

The Berkeley Inn, known to Geyer’s generation as a fleabag hotel, once stood on the parcel of land. Geyer’s first shop opened in a basement space at the inn in 1969 on the same weekend as People’s Park, which hosted antiwar and civil rights protests.

A fire destroyed the hotel in the 1980s, leaving a rubble-strewn lot that sat vacant until construction crews broke ground for the Enclave in 2018, according to the building’s architects.

Geyer said he understands the criticism he has heard from other residents who bashed the building’s discordant design and “Disney-esque” rock facade. But he also decried the architectural dullness of other new housing developments sprouting up throughout the area and praised the Enclave’s designers for taking a chance.

“It’s not dull; it creates discussion. It’s something that will signify this part of Telegraph Avenue forever visually,” Geyer said.

The Goldman Sachs-led group bought the property from a group of developers that includes LBA Realty, based in Irvine. Its previous owners seemingly turned a high profit in the sale.

The value of the property was estimated at about $48.9 million, according to the Alameda County Assessor’s Office’s online records.